Well I discovered something positive today: I produced a CD (Owl & Pussy Cat...) to raise money for the charity and last year I put some of out on a Podcast on iTunes. Unexpectedly I discovered today that its the UK's 9th most popular podcast in the "Kids & Family" category! Fame at last..?
Posted by Richard Price at 2:04 pm No comments:

Jon Pritchard died last week after a long illness. Although we had feared this news for while its still sad and unsettling to hear it, he will be impossible to replace in many ways, not least as the most skilled and experienced clinician we knew and also the most enthusiastic supporter of the HRTrust.

On top of that we have received more stories from parents who have lost children to Histiocytosis of one sort or another including Daniel Connacher and Andrew Jones. It is ironic that now we have our new site (built on Liferay) up and running at a redirected http://www.hrtrust.org and yet the first new stories have been tragedies of one sort or another.

On the positive side, Jon's legacy is alive and well with meetings planned in UK and of course the website is finally live (more postings later about that). Things, as they say, can only get better...
Posted by Richard Price at 4:24 am No comments:

What's it all about then, eh?

Sad news: Biggles died yesterday. He was in one of the best animal hospitals in the world but had a cardiac arrest whilst coming round from a general anaesthetic that was required to take biopsy material from the mass in his chest. Apparently 99.99% of animals that undergo the procedure survive it - I guess Biggles finally ran out of lives...
:(

Strangely, we still don't know what the problem was, although some earlier blood tests had been "suggestive" of FIP again. The Vet school are going to do a Post Mortem to see if they can find out more about it - clearly they are interested to know what effect the Interferon had on him, and how it influenced the course of the disease.
Posted by Richard Price at 10:41 am No comments:

I think what many users would like to see on a MediBlog is some detail of someone else who had the same problems and what happened to them. This would have to be voluntary of course but I think, especially in rare/cronic diseases or animal health, people are generally quite open about some experiences.

To illustrate the point I, unfortunately, have the cases of FIP in our cats which to share with the Net. Over there--> is a picture of Basil who was the first to be diagnosed with it. He is not a fat cat here, his insides have been surrounded by fluid, caused by a destructive reaction to a virus. 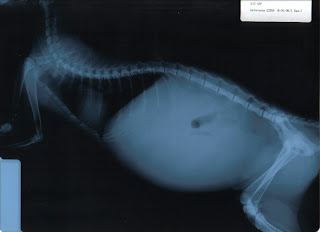 This is an x-ray of him. All the white haze is basically "fluid" surrounding his organs. His symptoms were basically just lethargy and loss of appetite before he started to swell up. The vet attempted to treat him with a new regime of Interferon + steroids. Unfortunately this had no effect on him and he was euthenased (put to sleep) shortly afterwards, following a series of fits.

This in an x-ray of Biggles, his half-brother taken about

a week after Basil died:Here the dark area in his chest is the air in his lungs - a closer look shows some more white haze around them, this is fluid caused by FIP. Interestingly, Biggles' reaction to the virus was in his chest area - limiting his ability to breathe hence he did not swell up in the same way but was likely to die sooner.


He too was given the steroid and interferon treatment and he responded, within a couple of weeks the picture was different:

Biggles survived all through the summer on regular but reducing doses of treatment until he was off all treatment.

He then got ill again with weight loss and loss of appetite in Dec -Jan-2007. This time his latest symptoms were not quite as one would expected for a cat with FIP so an x-ray was to examine other possibilities: here the stuff at the bottom is his collar (complete with bells and magnet catflap key).

And this is where the limitations of clinical images on the internet can be seen - or rather not seen as there is, apparently, a mass in there somewhere near his heart. I'm not a vet so I wouldn't know an unusual mass if it jumped out and bit me but one would expect that to "see" a mass that the image would have to be better than you see here!
Posted by Richard Price at 7:41 am 1 comment:

I think it was Oscar Wilde who said that to lose one parent may be regarded as a misfortune; to lose both looks like carelessness. On a somewhat less traumatic (but nevertheless painful), theme I've been wondering about our unfortunate little cat, Biggles and whether or not there's something we could have done differently. He is one of only around a dozen cats in the world to have survived "Feline Infectious Peritonitis" thanks to the innovative use of a drug called Interferon. After causing much interest and becoming a minor celebrity at our local Vet hospital last year he settled down to normal cat-type life of wondering around the house & garden, catching insects, eating, sleeping, eating, sleeping, eating, sleeping, staring out of the window, eating, sleeping.... Then a few weeks ago his routine seem to focus more on just the sleeping until he began to lose weight and we took him off to the vet last week fearing that the dreaded "FIP" was back. Well, it was good new/bad news: FIP has still gone but he's got cancer!

As he is still cared for under Sainsbury's Pet Insurance we have some options for him which seem rather exotic and expensive: believe it or not, he has to go to Cambridge University Vetinary Hospital for a biopsy, surgery and possibly chemotherapy. This is on top of his earlier bad luck - when he was born his mother died and all his siblings along with her, before he was born his father died too. He was rushed to a foster mother at 2am where he survived for a week before being swapped to another mother and then started, at last, to thrive. Then he & his adopted brother Basil both got FIP, Basil died and Biggles (as above) managed to survive again.

Well if cats have nine lives, maybe he has one or two left..? Watch this space...
Posted by Richard Price at 10:42 am No comments:

Small world, getting smaller - and bigger

I just received the 2007 update from Ndiyo - a fascinating organisation creating hardware solutions for poor communities in developing countries to allow them access to the internet. This vision is aligned with open source software, microfinance and even "green" initiatives. The idea is to offer a network platform to internet cafes, schools & small businesses anywhere with a phone network, they can set up 10 or more terminals to each low-spec "server" running Ubunto Linux and connect all of them to the internet via a single mobile phone whilst consuming only 5% of the power of a similar PC based LAN. Initiatives like that could increase the web community massively. Ndiyo are looking for commercial revenue streams, maybe they should be thinking about a web community of their own as they can probably capture the homepages of all their users with some kind of iconoclastic domain name like Yagoogrosoft.com or something... I'd suggest it to them but they've probably already thought of it, and I should probably just shut up and stop having "bright" ideas.

(..and that reminds me of something I read about the Capricorn Africa Society, started by the same guy who invented the SAS during WWII...)
Posted by Richard Price at 11:37 am No comments:

Back to Life (ray)

I've just spent a few days wrestling with some other SAP technology, namely the SAP eCommerce WebShop which (just to confound the innocent SAP technical consultants out there) is based on Java/JSP & Struts technologies with JCo (SAP Java Connector) links to the ABAP based CRM backend services for master data, catalogs/pricing, etc. One might be forgiven for thinking that BSPs would have been a more SAP-oriented choice but standard web tools allow customers to use standard web programming skills and designs to present their commercial (B2C & B2B) faces to the outside world. Maybe, but we still have to use the NWDS and the NetWeaver Development Infrastructure to migrate changes so its not quite as simple as all that... ah well,

Arrived home to hear that the guys at Liferay have now re-installed the HRTrust portal for me and it all seems to work Ok. So as if 18 hour days on SAP webshops aren't enough I'll be spending some time at the weekend on my Liferay content ... ah well,
Posted by Richard Price at 5:37 am No comments:

I just remembered that I've added the google AdSense here. Lo & behold Google are going to pay me US$1.47 because a couple of visitors must have clicked a couple of adverts. Blimey.
Posted by Richard Price at 4:11 pm No comments:

...just in case anyone wants to learn about SAP's SOA capability from some real experts I can advise a look at Enterprise SOA by Dan Woods and Thomas Mattern which is the one SAP were giving away free at TechEd, Amsterdam last year. We got to meet the authors to get our copies signed. NB its SOA in the context of SAP products and strategies but it should be relevant to geeks everywhere.
Posted by Richard Price at 4:04 pm 1 comment: