My, my how time flies.

Well now playing about with the latest versions of Ubuntu LTS server version and Liferay on Tomcat. On initial install of Ubuntu I didn't install any Java S/JDKs and thats why the Liferay Tomcat bundle didn't work at all. So, I accidentally forgot to install the SUN (Oracle JRE) and installed the Open one which worked fine except that I am now getting all sorts of errors and unexpected things happening including stack traces when uploading logos and going to maintain my personal account details, which requires a repeat sign-on.

So, I decided to try switching to the Glassfish bundle but first realised I may as well fix the JRE first and see if that solves the problem.  First then, how to figure out which version you're running:

I think I need the Oracle/Sun version to be sure so uninstalled it:

Now I need to install the correct version, which should be done via these commands (from HERE)

Unfortunately I got this message:

So first I have to fix that!

Best guess so far is from HERE: which indicates that I need to install Python things:

So now I can try the command I was going to try earlier:

which gave me scary message:

You are about to add the following PPA to your system:
Oracle Java (JDK) Installer (automatically downloads and installs Oracle JDK6 / JDK7 / JDK8). There are no actual Java files in this PPA. More info: http://www.webupd8.org/2012/01/install-oracle-java-jdk-7-in-ubuntu-via.html
More info: https://launchpad.net/~webupd8team/+archive/java
Press [ENTER] to continue or ctrl-c to cancel adding it

so I added it of course, and continued with:

...which updated loads of things and so I thought it would be worth the next step:

And now it's installing, in fact I get a "YOU MUST AGREE TO..." screen from Oracle.  So I hit Ok and now it's connected to oracle and downloaded stuff, then cleaned up a cache then set up fonts or something and triggers....

Now finished and seems to be all done.  So I'll try my Tomcat/Liferay install again.

Now trying out the Proof-of-concept site www.histiocytosis.org.uk again, its taking a very long time to load... Hmmm, is it broke?  I wonder....

Well, typically, the site is up but we have the same damned problems with the saving of changes to My Account and the logos.  This seems to be the same as THIS ISSUE on Liferay forums:

Of course, the sharp-eyed amongst you will have realised by now that I missed out on Step 4:


Me, being somewhat less sharp-eyed just noticed.  So I'll try it now..


which sort of suggests I already have the oracle version running.  I selected 2 anyway and rebooted and restarted Tomcat to see if the issues are fixed, with little confidence I have to say.


Posted by Richard Price at 2:31 pm No comments:

Updating Liferay Tomcat Bundle to use MySQL instead on HSQL

Though we are still on Glassfish because of Java development issues, here are a few notes made whilst mucking about with Tomcat. We created another site (www.centralsup.com) with Liferay on Tomcat using this approach 'cos we don't intend to do any development on that site
===
WARNING
This is all very standard, there are additional security precautions that should be taken at the network, OS, Db, WAS and application layers.
===
FYI: I've used Daily.co.uk and Rimuhosting.com as VPS providers. Rimu are little more expensive but better; Daily had some weird thing with their Virtualisation model which fouled up my Java memory somehow when they "patched" it (and incidentally, they rebooted my VPSs far too often for my liking...) - this issue broke two of my websites and I chose to move elsewhere. So, you get what you pay for and I'm with Rimu again - in fact, if you want a really shortcut just ask the guys there to install Liferay when you buy the server!
- On new server you will just have an IP address.
- you will have root access and have a password
- putty to that IP address port 22 and log in as root
DOWNLOADS
1. mkdir /usr/local
2. mkdir /usr/local/downloads
3. mkdir /usr/local/downloads/liferay
4. From the new directory use wget to download the Liferay Tomcat bundle
- - e.g. from 'http://downloads.sourceforge.net/project/lportal/Liferay%20Portal/6.0.6/liferay-portal-tomcat-6.0.6-20110225.zip?r=&ts=1318160482&use_mirror=netcologne'
5. (maybe) if the name of the file that is downloaded is not called 'liferay-portal-tomcat-6.0.6-20110225.zip' then rename it using 'mv
6. mkdir /usr/local/downloads/mysql
7. from the ../mysql dir you created download the MySQL driver from 'http://dev.mysql.com/get/Downloads/Connector-J/mysql-connector-java-5.1.18.zip/from/http://mirror.switch.ch/ftp/mirror/mysql/'
8. if necessary rename the file correctly to mysql-connector-java-5.1.18.zip
9. Unzip it.
10. You should have new directory called /usr/local/downloads/mysql/mysql-connector-java-5.1.18
11. ..in there is a file called 'mysql-connector-java-5.1.18-bin.jar' This is important, you will need to copy it to a new location later.
INSTALLATION Step 1 - Default bundle
1. from within /usr/local/downloads/liferay 'cp liferay-portal-tomcat-6.0.6-20110225.zip /usr/local/
2. cd /usr/local
3. unzip liferay-portal-tomcat-6.0.6-20110225.zip
4. ls
- - should see a new directory 'liferay-portal-6.0.6' and the zip file.
5. Delete the zip file: 'rm liferay-portal-tomcat-6.0.6-20110225.zip'
6. cd /usr/local/liferay-portal-6.0.6/tomcat-6.0.29/bin
- - in here you should see a script called 'startup.sh'
7. bash startup.sh
8. in a browser goto
- - you should see Liferay with the 7 Cogs set up and default demo users.
- - if all is well shutdown 'bash shutdown.sh'
INSTALLATION Step 2 - Prepare MySQL
The server should have MySQL installed already (that should happen on installation of Ubuntu). so check:
1. sudo netstat -tap | grep mysql
- - you should see something like this:
- - 'tcp 0 0 localhost.localdo:mysql *:* LISTEN 9276/mysqld'
2. reset the root password, you do this using the statement dpkg-reconfigure mysql-server-5.1'
- - the MySQL shuts down and a dos-like dialog box opens up and you can enter a new password (write it down, it's important!).
3. Create a new database called 'lportal'.
- log on to mysql using 'root' and your new password: 'mysql --user=root --password=
4. create the database: and the command prompt, mysql> create database lportal;
- - (NB you need the semi-colon in that statement.
5 confirm the database is created: 'show databases;'
mysql> show databases;
- you should see a list of databases including 'lportal'.
NOTE - this does not create all the tables for the portal, just the empty database. On start up, if Liferay doesn't find the tables it creates the whole database from scratch inside the empty lportal database - Or at least it SHOULD do. If it doesn't you will have to run the script held in the Liferay Dependencies files (see liferay.com for that).
INSTALLATION Step 3 - Connect to MySQL Database
1. cd /usr/local/downloads/mysql/mysql-connector-java-5.1.18
2. cp mysql-connector-java-5.1.18-bin.jar /usr/local/liferay-portal-6.0.6/tomcat-6.0.29/lib/ext/
3. cd /usr/local/liferay-portal-6.0.6/tomcat-6.0.29/lib/ext/
4. ls
- - should see your filed copied there, amongst other stuff.
5. navigate to /usr/local/liferay-portal-6.0.6/tomcat-6.0.29/webapps/ROOT/WEB-INF/classes
6. In here you need to create, and update, the portal-ext.properties file (this is what tells Tomcat to use the MySQL database)
7. vi portal-ext.properties
8. paste in the following:
#
# MySQL
#
jdbc.default.driverClassName=com.mysql.jdbc.Driver
jdbc.default.url=jdbc:mysql://localhost/lportal?useUnicode=true&characterEncoding=UTF-8&useFastDateParsing=false
jdbc.default.username=root
jdbc.default.password=
9. .. then :w and :q to save the information.
10. cd /usr/local/liferay-portal-6.0.6/tomcat-6.0.29/bin
11 bash startup.sh
12 go to
You have a production server ready to go.
Posted by Richard Price at 12:03 am No comments:

Installing Liferay on Glassfish and MySQL and Ubuntu Server (again)

Well, strangely enough we have to start again on a new server. A brief history of how we got there is as follows:

* All working fine on our own hosted servers in a garage
* Router issues
* Electricians in for unrelated maintenance so lots of annoying reboots and shutdowns
* VPS ordered with cheap provider
* Cheap provider upgraded virtualisation software and fouled up java memory allocation then asked for more money for more memory (Grrrr...).
* Lots of wailing and gnashing of teeth and swearing
* VPS ordered with Rimuhosting
* VPS with Cheap provider cancelled.

...which, to cut that long and tortuous story short is why i'm here again to explain how to install Liferay on Ubuntu/MySQL/Glassfish.

Please note: if you want Liferay on Tomcat and don't have anything other than vanilla Liferay in mind then ask the nice people at Rimuhosting to install it from the bundle when you commission the server - they have a script for that sort of thing and you will save yourself much grief (be sure to ask for the MySQL stuff though as the Derby/HSQL is not for productive systems, etc.)
Posted by Richard Price at 12:21 pm No comments: 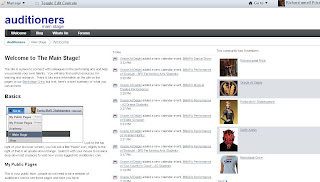 A few more things have been done now:
Also, we now have a proper Dev server (from Dell) although not yet commissioned
Our sights are now set on a go-live for some pilot users in August/September - when we've done a bit of tidying up and finished one more important bit of functionality.
Posted by Richard Price at 5:45 am No comments:

After several more weeks of faffing about we now have the Social side of Liferay working so that our users can request friendships and once "friended" they can post on walls, get updates on activities, etc. We also have an Amazon bookshop, Google Adsense, YouTube integration and a conceptual model of the main default communities. Also, email notifications for new users and password resets, etc. and Chat are working nicely. We now have to play around with site and ensure that the default behaviour is appropriate and, sadly, begin to find the limitations of out-of-the-box Liferay portlets.

Aside from that, we've been busy updating an "Audition Pieces" database and a database of specialist Drama Schools in the UK along with the audition fees, main requirements, etc.

We have our own "FavIcon" too, thanks to the advice on the Liferay forum about this. And it does look much nicer.
Posted by Richard Price at 10:57 am No comments: